5 Simple Steps To Get Out Of Debt Faster

Get Out of Debt Fast. 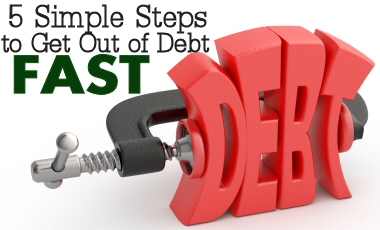 Are you drowning in debt? Is it tough to come up with the money to pay your bills every month? Does getting out of debt seem absolutely impossible?

Don’t stress, my friend! It can be done!

Here are 5 simple steps to get out of debt faster.

Creating a budget is essential if you want to pay off your debt. You need to set limits. Instead of going to the grocery store whenever you run out of food and buying whatever looks good, you know that you only have a set amount of money for buying those items. This makes running to the store and spending whatever you feel like unacceptable.

When you create your budget, make debt your top priority (after paying yourself first, of course). Cut back on every single little thing that you can, and put that money towards your debt.

Once you have finished creating your budget, look it over and make sure that it’s realistic. Your monthly bills need to be less than the amount of money you are bringing in every month, otherwise your budget won’t balance and your plan is bound to fail.

2. Cut or reduce as many bills as possible.

If you are really serious about paying off your debt quickly, cut your entertainment budget back to $100 per month or less (but still include it – you need some entertainment so that you don’t go crazy while paying off all that debt!).

Get rid of your cellphone or landline, colour your own hair, start using coupons to save money on groceries, move to a smaller home or apartment, get rid of your vehicle and take public transportation, switch to a no-fee bank account – there are so many ways to save money. Put those savings toward your debt.

Whether you have to get a 2nd job or sell things on Craigslist, you need to make as much money as possible if you want to knock out that debt in a hurry.

Unless you have a lot of high-value items to sell, getting a 2nd (or 3rd) job is probably the best way to make some extra cash.

I understand that it may be near impossible to get an extra job for some people. If that’s you, try asking your current boss for a raise or more hours.

It’s important to celebrate your accomplishments, big or small. If you have a ton of debt to pay off, it may seem like there’s no way you will ever be debt free. Instead of making your goal to “pay off all debt by the end of the year”, have a few small goals.

Setting small goals, instead of one huge goal, makes the task at hand seem much easier and less stressful.

Often times, when someone pays off a credit card and still has other debts, they will use that money that they paid toward the first credit card and put it right back into their budget as extra money. Instead of doing that, put it towards your next credit card.

Using the example above, you have to pay at least $565 every month towards these 4 debts. However, since you want to get out debt fast, you will need to pay more than just the minimum payment – but just for the one debt with the highest interest.

You’re already used to spending that money anyway, so you won’t notice anything different.

By following the 5 simple steps above, you will be well on your way to getting your debt paid off fast.

Remember to keep at it – no matter what challenges you may face. There’s no better feeling than knowing you don’t owe anyone anything.

Are you in debt? How are you doing in your quest to get it paid off?

10 Ways to Save Money on Your Vacation

Everything You Need to Know About Brokerage Fees

The Best Secured Credit Cards of 2022