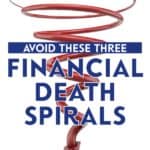 One of the most difficult financial positions to be in is the death spiral. There are times when your money habits get you stuck in a vicious cycle that is difficult to end.

If you want to avoid short-term financial stress, as well as long-term money problems, you need to try to avoid the following 3 financial death spirals:

Once the bank fees start piling up, it’s hard to get out from under them. If you have an overdraft, it can cost you between $25 and $45, depending on your bank’s policy. And that fee can be charged for each transaction that is over the limit.

If you aren’t careful, you could end up with hundreds of dollars in overdraft fees before the bank finally starts denying transactions. It can be hard to get out of this cycle because once you are behind due to fees, your balance is sucked up as soon as a new deposit is made.

You get further behind, and the fees keep piling up. You could end up paying thousands of dollars each year in fees due to this death spiral.

To get out of this death spiral, it’s vital that you step back, consider your situation, and make a plan. Make sure you are living within your means. Also check the cash flow situation to make sure that timing isn’t a problem. If you need to, see if you can change the due dates on some bills to better coincide with when you receive income.

It’s tempting to pay your bills late when you aren’t sure if the money is going to be there. However, this can also cause problems. You might be charged late fees. On top of that, chronic late payments on credit bills can drag down your credit score, costing you money in the long run.

Once you pay bills late and start racking up late fees, it’s harder to pay on time next month because the bill is even bigger. You can even get in the death spiral of ignoring bills for as long as possible (sometimes not even opening them) in order to put off the unpleasantness. This only makes things worse.

Again, planning is vital if you want to break out of this death spiral. You need to be sure to match up your bill schedule with your income schedule. Also, take a look at some of your bills and see if there is a way to reduce them. Some services can be canceled. You might also be able to get your interest rate reduced on some debts to make your bills more affordable.

Figure out which spending to cut and adjust the situation so that the budget as a whole is more manageable.

If you find yourself constantly “needing” to turn to credit in order to make ends meet, that can be an indication that you need to change your financial habits. You say it’s a last resort because you just need to get through the end of the month.

However, the truth is that it becomes a habit. Additionally, chances are that you can’t afford to pay off the balance each month. Instead, you pay the minimum, or you pay just a small amount more than the minimum, and your balance slow builds each month. It may only be an extra $50 or $100 to the balance each month, but eventually that adds up to a big debt after a few months. Soon, you realize you’re in a financial death spiral that’s hard to get out of, since the high rate of interest hinders your pay down efforts.

In order to get out of this one, you need to be firm about not spending more than you earn, and then put together a plan to pay off your consumer debt as quickly as possible.

Track your spending to see where you might be wasting your money. Look for ways to save money each month, and use that money to pay down debt. Plan your finances ahead of time so that you aren’t caught short on bill day. If you can change your habits, you can pull yourself out of the financial death spiral to create a much better financial future.

How to make a budget: Your one-stop shop

How to do yoga for less

Top tips for sticking to a budget