How to Invest Your Money » Cryptocurrency 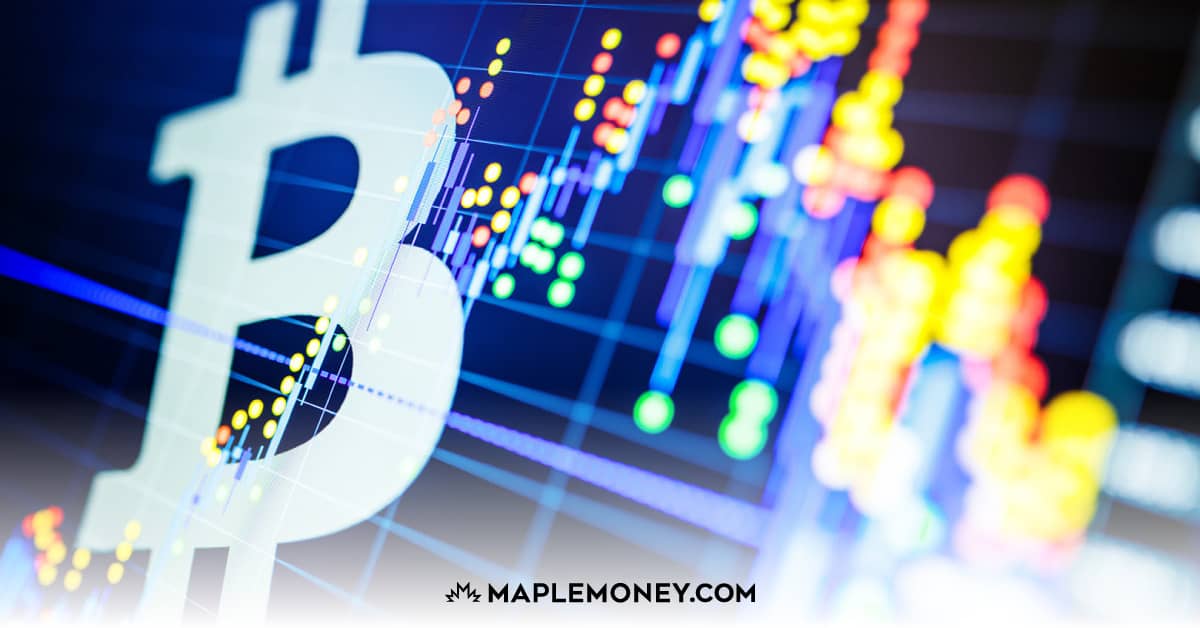 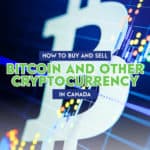 If you pay attention to investing news at all, it’s impossible not to notice the emergence of Bitcoin. This speculative currency has become enormously popular in Canada, with online exchanges and Bitcoin ATMs showing up just about everywhere. Still, there are many questions that need to be asked. What is Bitcoin, and how can I buy it? Is it even a good investment?

In this post, I’ll show you how to buy Bitcoin in Canada, and share my thoughts on whether or not you should place your hard-earned money in this speculative investment at all.

Bitcoin is a digital currency, also known as a cryptocurrency, that does not exist in a physical form.

You can’t hold bitcoin in your hand, as you would Canadian dollars. There are a number of reasons that cryptocurrencies like Bitcoin have become popular, the main one being that it’s very difficult for governments and central banks to regulate. The decentralization of cryptocurrency also provides a certain level of anonymity, which appeals to a lot of buyers.

There are actually hundreds of cryptocurrencies in existence, Bitcoin just happens to be the most common, and well known. You may have heard of other crypto’s, such as Litecoin, or Ethereum. In lieu of a central exchange, Bitcoin transactions are stored on something called the blockchain, which is a digital ledger that is maintained on several computers in a peer-to-peer network around the globe. The ledger cannot be deleted or altered, making it very secure.

Bitcoin transactions are verified through a process called Bitcoin mining, in which powerful computers solving complex mathematical calculations to confirm transactions. Bitcoin miners are paid in Bitcoin to perform this task. If you’re not already lost, trying to explain bitcoin mining in detail will certainly do the trick. For the purpose of this article, I’ll refer you to another post which goes into more detail on the bitcoin mining process.

The Risks Involved with Bitcoin

Whenever I’m writing an investment-related piece, I’m careful to disclose the risks associated with the investment I’m writing about. In the case of Bitcoin, I’m going to address the risks right from the outset, because they are great. In fact, although I use the term ‘Bitcoin investor’ throughout the article, I don’t consider Bitcoin, or any cryptocurrency for that matter, to be an actual investment. Rather, it’s a form of speculation, some may even consider it a complete gamble.

That’s because the demand behind Bitcoin is based solely on hope; the hope that someday cryptocurrency will produce a return that’s equated to some sort of tangible value. Yes, people have made money with Bitcoin. In fact, some have made millions.

But to qualify as an investment, an asset needs to demonstrate with some certainty, the ability to produce positive cash flow, such as a bond, a rental property, or a dividend-paying stock. That’s not the case with Bitcoin today.

In my opinion, Bitcoin should be considered a risky speculation, similar to forex trading, or even buying an antique or a painting, as an ‘investment’. You hope it will go up in value, but you have no idea if it will.

How Can I Buy Bitcoin in Canada?

There are a number of ways to buy Bitcoin in Canada. Which option you choose will depend on a number of factors, including how much you want to purchase, and where you live.

The most popular way to purchase Bitcoin in Canada is through an online exchange. Some of the more common exchanges are Bitbuy, MyBTC.ca, and Coinsquare. These exchanges provide bitcoin buyers with several options in which to fund their accounts. Because online exchanges are, in my mind, the best way to buy Bitcoin in Canada, I’ll give you a detailed breakdown on the various ways to fund your account. Let’s take a closer look:

Interac E-Transfer is one of the fastest ways to send funds through a bitcoin exchange. In some cases, you can fund your account and own bitcoin in as little as an hour. Because most Canadians are familiar with Interac, it adds an element of trust to the process. You would start by opening an account on the exchange of your choice.

From there, you’ll access your bank account through your online banking service, and request that an e-transfer be sent to the exchange. There will be an email provided when you open your account with the Bitcoin exchange. Once the funds arrive, you can purchase your Bitcoin, and your funds will be moved in what’s called a secure wallet.

If you want to fund your Bitcoin account using your credit card, make sure the exchange you’re dealing with accepts credit cards as a payment option. While this is a convenient way to go about buying bitcoin (simply follow the steps provided by the exchange), there is a downside. For starters, the credit card company will process the purchase as a cash advance, meaning that you’ll begin paying interest right away.

In addition to using E-transfer, you can send funds through a wire transfer from your bank. You need to make sure that the Bitcoin exchange is set up to receive funds via wire. This option is usually limited to investors who are making larger purchases, as wire transfer minimums can range anywhere from $5,000-$10,000. Wire transfers will also take longer, anywhere from 24-72 hours, on average.

Not only that, but the cash advance interest rate is often higher than it is for regular purchases. The fees charged by the exchange can be quite high as well, often more than 5%. At the very least, make sure you have funds available to pay off your credit card balance in full as soon as the transfer is made.

Flexepin may be the least familiar method for buying Bitcoin, but it is a cheaper and faster way to move money. The first step is to purchase a Flexepin voucher from a retail store location. From there, redeem the voucher through a Flexepin-compatible exchange, and you’ll be on your way to buying bitcoin. Flexepin may be the quickest transfer option, as funds can often be transferred in less than an hour.

There are hundreds of Bitcoin ATMs in Canada, although most of them are in the largest centres, such as Toronto, Montreal, and Vancouver. If you are fortunate enough to live close by, you can make your Bitcoin purchase at the ATM, using your debit or credit card. Often, the Bitcoin ATMs have higher maximums than purchasing online through a Bitcoin exchange. This Bitcoin Locator will help you find a machine near you. Use caution though, fees at Bitcoin ATMs tend to be very steep.

Trading Bitcoins using a P2P network allows you to deal with other Bitcoin traders directly. The most popular site is LocalBitcoins, and it’s often compared to a Kijiji or Craigslist, for cryptocurrency.

Sellers must be verified with the site, and they will accept e-transfers, as well as meet in person if they happen to live in your area. As a buyer, you will be expected to provide identification prior to swinging a deal.

Advantage to P2P trading is that you’ll avoid most of the processing fees charged at a Bitcoin ATM, or by an online exchange. The downside is that the actual trading prices charged by the direct seller tend to be higher, so you’ll want to do your math.

Many Bitcoin exchanges, such as BitBuy, will allow you to make very large Bitcoin purchases using a method referred to as over-the-counter. This process allows you to deal directly with an OTC trading specialist, and lock in a price on a very large amount, let’s say, $25,000 or more. If P2P is the Kijiji of Bitcoin trading, this is the Costco. You’ll be able to get instructions on completing an OTC trade directly from the exchange that you’re using.

Coinsquare: An Inside Look at a Bitcoin Exchange

As I mentioned above, online exchanges are far and away the most popular way to trade all kinds of cryptocurrency, including Bitcoin. One such exchange is Coinsquare. As with most online exchanges, Coinsquare allows you to open an account within a few minutes by providing your email address, and after going through a series of questions.

From there, you’ll be asked to provide some additional info to verify your account. According to the Coinsquare website, you can access no less than 10 digital currency markets including Bitcoin, Etherium, Litecoin, Ripple, and Dash. Coinsquare discloses the basic trading fees on their site, which range between .10% for a market maker order, to .20% for a market taker order. You’d want to do some additional research to understand their full fee structure. Coinsquare accepts a number of payment methods from which to fund your account, including Interac E-Transfer, and through Coinsquare QuickTrade, you can exchange between various digital currencies instantly ie. XRP to Ethereum.

Coinsquare is a Canadian company, based in Toronto. While I’m not a customer, their website and mobile app both look very slick, making it easy to stay up to date on your cryptocurrency portfolio. You can do basic trading with Coinsquare, and they also over OTC trading as well as wealth management services to their most elite clients. If you have more than $25,000 in digital currency, Coinsquare will put you in touch with an Account Director who is “dedicated to the growth of your digital currency portfolio.”

I’ve been very clear about the risks involved with owning Bitcoin. But that’s not to say that there aren’t a number of advantages to holding cryptocurrency. Here’s a list of the many Bitcoin pros and cons:

Should I Buy Bitcoin?

After reading this article, you may be having second thoughts about buying Bitcoin. Or perhaps you’re more determined than ever to dive right in. After all, I’ve tried to make the process easy to understand. All I can say is this. Remember the risks. Personally, I don’t own Bitcoin (I’ll update this post if anything changes), and I never advise anyone to purchase it.

That said, if you’re determined to own Bitcoin, or any other cryptocurrency, my only advice is that it’s speculation, not gambling. In other words, only use money that you can afford to lose.

Back to school routines – easing in

17 Simple Rules to Live Within Your Means

What is CMHC Mortgage Insurance?