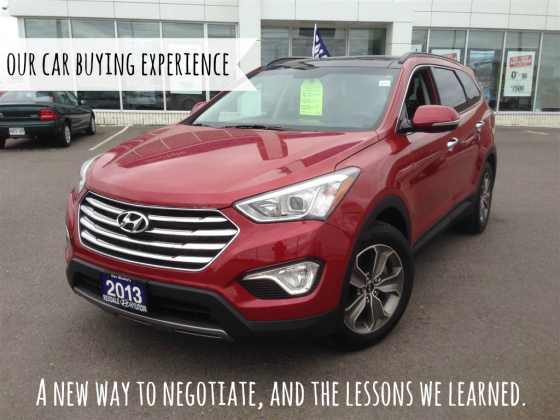 After being a one-car family for 5 years, my husband and I decided that it was time for us to get a second car again.

I will be walking my kids to and from the school every weekday, and most times this is fine, but on days when it’s very rainy or snowy, it’s extremely challenging (especially right now when my 2-year-old is in the stroller-pushing that thing in snow and ice is incredibly difficult).

On top of that, I also have appointments and business stuff that I just can’t do when my husband has the vehicle most of the day.

So – insert car #2. We tried to think of other options. Avoiding buying a second car was our top priority, but no matter what we seemed to come up with, nothing was really going to work for us, and we eventually came to the realization that a second car was just what we needed to do.

And so began the process of finding the right car and getting a good deal on it.

Deciding on a vehicle

After much consideration, we decided on getting a Hyundai Sante Fe XL for the simple fact that we wanted a larger vehicle but didn’t want to get another van. The Sante Fe was big enough for our family, so that’s what we determined was the right vehicle for us.

I looked into some car dealerships online and as I was searching, I noticed that almost all of them had a contact form on their websites. This got me thinking about a blog post I had read not long ago, where a man and his wife did all of their car negotiations via email.

There’s not much I hate more than standing in a dealership parking lot, being sold to buy a commission-hungry salesman.

So, I thought I’d give email negotiations a try.

First, my husband and I researched the value of the Sante Fe. I signed up to Car Cost Canada to see how much a new Sante Fe would cost the dealership. Then, I tacked on a 2% commission (most dealerships aim to receive at least a 4% commission on the sale of a vehicle, but will often come down to 2%).

That was the number we wanted to pay for a new vehicle. If we went with a used vehicle (which was preferred), we were planning on cutting the proposed price by at least 2%.

I sent the following email to about a dozen dealerships in our area:

Hello, my husband and I are looking to buy a Hyundai Sante Fe XL by the end of the week. I am interested in the lowest, out-the-door, price you can offer on both of the following two options:

Price is our biggest factor, with the kilometers being second. Again, full, out-the-door, prices are what we’re interested in, so we can compare prices with other dealers.

The responses started coming in

Wouldn’t you know it – in less than 30 minutes, I’d already received a reply from one of the dealerships. I couldn’t believe it. They asked me two questions – neither of which I wanted to answer.

1. What is your budget? (NEVER give away this information, this is your only leverage!)
2. Are you paying cash or financing? (Never give this away either!)

I responded, thanking the dealer for the quick response, and letting him know that we were looking for both financing quotes AND cash-only quotes and that we had to consider many factors when it came to price. I didn’t mention the word “budget” at all.

Soon, more emails came in from other dealers, and many asked the same questions, some came back with their “rock bottom price” (which was laughable how ridiculous the “discounts” were), and some clearly didn’t read my email at all because they didn’t answer my questions or asked me if I wanted to be used or new (I wanted prices for both and mentioned that in the email).

I responded to them all, giving the information they requested unless they asked for my budget or how I was paying, in which case I just changed the wording to swing it back their way.

Getting rid of the bad seeds

I eliminated about 8 or 9 dealerships that clearly were not interested in negotiating and stuck with the others that seemed interested in making a deal.

We emailed back and forth for a few days and eventually, one dealership was really pushing for our business on a used 2013 Sante Fe (it was the luxury model, which was not needed, but it’s all they had in stock), and I liked that they were interested in negotiating with us and doing it all via email (and eventually over the phone).

They kept lowering their price, but they wouldn’t go as low as we wanted, so we kept pushing back. The dealer called me the last day and told me that this was their final offer and that if they would be losing money if they went any lower (this is a trick many dealers will use on you, so be wary of any that say it to you!).

We got them to about a 3% discount, but also told them we didn’t want any other taxes or fees on top. We would pay cash for the car, no financing. They agreed to that.

I was happy. My husband was happy. But I am also frugal, and frugal people try to get more out of anything they can, so, I thought – what the heck, I’m going to ask for floor mats, too (I was going to need to buy them anyway!).

I asked, the dealership agreed, and I happily collapsed on the couch and napped for hours (negotiation makes you tired, apparently).

And so it was done

I honestly don’t think I would have been able to get a discount as low as we did if we did the negotiating on the dealerships turf. By doing it all online, I held the reins and had time to carefully consider my responses to each offer. It wouldn’t have been as easy in person.

A few days later, we went in, signed the paperwork, and drove away in our new car.

Although I am happy with our big purchase, and will definitely do it again the next time we need a new vehicle (hopefully not for a long time!), there are some things I wish we had done differently.

Thankfully, we didn’t have any issues with them, but I think it would have made us feel a whole lot more confident with our purchase, had we read glowing reviews of who we were giving our money to.

Check the vehicle out (during the day!) – We already knew the vehicle we wanted, and we planned to test drive it before signing on the dotted line, but we didn’t actually LOOK at the car. We did the test drive at night, signed the papers, and picked up the car during the day at a different time.

When we picked it up, we looked it over and noticed a few scratches on the hood and side of the vehicle. They’re very minor, and I would have bought the vehicle anyway, had I seen them earlier, but I probably would have been able to negotiate a bit more if I had noticed those marks before signing the paperwork.

This was a big mistake on our part and could have been much worse than it was.

Test drive with the kids – I didn’t even think about bringing the kids for the test drive, but what we later realized, was that with two car seats in there and doors that don’t slide open (like our van does), it’s a tighter fit for the kids.

It’s not bad by any means, but it’s certainly not as roomy as it is with our van. Once the car seats are out of there, it should be fine, but right now, getting them strapped into their seats is a bit tricky.

Overall, this was a good experience for us. We bought something we needed, at a price we were comfortable with, and did all of the hard stuff (negotiation) online instead of face to face.

The dealership we went with was Rexdale Hyundai in Thornhill, ON – if you’re interested in buying a car in this area, I really do recommend them (but do your own research first, of course!).

Have you ever negotiated the price of a big-ticket item via email?

A Dozen Good Reasons to Move to Canada

10 Ways to Reduce Your Water Bill

What’s yours is mine: Consolidating your debts after marriage