How to Invest Your Money » ETFs

As a low-cost index-investing advocate the recent trend in the world of discount brokerages has been a real party lately.  The reason I’m as giddy as a school girl is that Questrade recently announced that it was following the lead of a couple other companies out there and was eliminating the commissions it charges on transactions that involve purchasing ETFs.  Now it should be noted that investors will still pay commissions to sell ETFs, but if you’re a relatively young investor like myself, you’ll cross that relatively inexpensive bridge when you come to it in thirty years or so!  The important thing is that for today, commission-free ETFs mean more of our investment dollars will be staying in our nest egg in order to gain interest for us instead of being gobbled up the financial industry.  I think the most telling thing about this movement is the fact that brokerages are opening up the idea that the low-cost crowd is growing, and worth making a play for.

The one real advantage that mutual fund salesman could really hang their hat on when they talked about ETFs was that if you wanted to invest small, monthly amounts, then mutual funds would be a better route because you would lose such a large percentage of your ETF investments (ignoring the common sense solution of buying quarterly or even yearly, but I digress) due to trade commissions.  No longer can people in the financial industry muddy the waters of this debate with statements like, “Well sure our MER Fees are a touch higher, but everything costs money in this world.  You’re not even making a fair comparison, just wait until you compute fees into your investing model.”  That was a flawed argument to being with, but I’ve already fought that fight enough times.  Now though, that point is mute.  As long as you’re investing for the long term, and not trying to time the market or day-trade, then you can basically grow your money interest-free in your tax-advantaged accounts using ETFs without paying commissions at all – just like their mutual fund brethren.  Of course commission-free ETFs keep all of their built-in advantages such as MUCH lower MER fees, better liquidity, and vastly superior performance on the average.

Just In Time For RRSP Season

Because Canadian TV often leaves something to be desired I tend to turn on American stations every once in a while.  Recently I’ve noticed that a discount brokerage down in the States has been running commercials talking about how the average American loses over $100,000 over the course of their lifetime to mutual fund fees in their 401Ks (the American equivalent to our RRSPs).  Now before you make the direct comparison to Canada, think about the fact that the MER fees associated with American mutual funds are substantially lower than ours up here in the Great White North.  In fact, we continue to have the highest MER fees in the world.  The same principle can easily be applied here in Canada.  Any Canadian that invests in mutual funds their whole life is losing a huge amount of money (by my standards at least).  Make the wiser choice this year as you feather your nest using an RRSP or a TFSA – choose to keep more of your own money and more of your investment returns with ETFs.

Why I’m in No Hurry to Pay Down My Mortgage 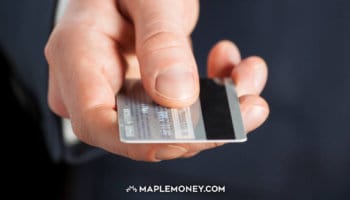 The Best No Annual Fee Credit Cards of 2020

Shop for Free With Coupon Overage at Walmart