Why I cut cable (and how I still watch TV)

Well, I did it. I finally cut the cord. The cable TV cord, that is. 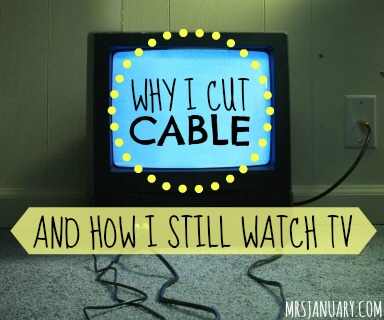 As a frugal living blogger, I always advise you to cut all unnecessary expenses if you’re in financial trouble – and as much as I hate to admit it, cable TV is a luxury, not a necessity.

Although my family is not in financial trouble, we are actively saving money to put towards big goals and to pay off our mortgage as soon as possible.

So – cable went bye, bye. And you know what? It truly wasn’t as hard as I thought it was going to be. We rarely watch television as it is (I think there are only 3 or 4 shows we watched on a regular basis), so cutting the cable cord wasn’t too difficult.

There were some concerns…

Friends and family were a bit concerned for us, though. “You’re going to be so bored!”, “What are you going to do for fun if you don’t have a TV?”, “Aren’t you worried about missing your shows?”.

To answer those questions…

So you don’t have anything? Not even basic cable?

No, we don’t even have basic cable. Do you know the price of something as simple as basic cable these days? In my neck of the words, it’s about $20 a month – or $240 per year. That may not seem like a lot of money to some, but it was a lot of money for us because we very rarely watched TV.

Spending that kind of money on something you hardly ever use is a waste – and that’s why we cut it off altogether.

Now, this doesn’t mean that we never watch television. We do, we just don’t pay a monthly cable bill to do it.

How we watch television now…

Instead, we now use Netflix. For only $7.99 per month, we have a wide variety of television shows and movies to watch whenever we want. And one of the best things about Netflix? You can pause what you’re watching.

So, the next time a cat pukes on my living room carpet, or my 4-year old starts climbing the counters in the kitchen, I can pause what I’m watching and take care of things.

Although you won’t find everything on Netflix, I do find their selection to be pretty good (there are more options on US Netflix, which you can get for free, we just haven’t tried that yet). For the shows that I really love and can’t get on Netflix, I can buy them on a one-off basis on iTunes or Amazon.

It’s been over a month now, and I honestly don’t miss cable TV at all. Not one bit. For someone who rarely watches television, Netflix is all I need. Even if I had the extra money to spare, I doubt I would spend it on cable.

There are many other things in my life that trump watching TV. I’ll spend my money on those, instead.

What about you? Have you cut the cable cord?

What Is Cyber Monday and Where Are the Best Deals?