How to Invest Your Money » RRSP 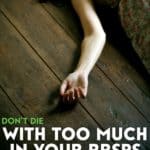 Have you ever heard people joke around about dying broke or spending your kids inheritance? It may not really be a joke but I can tell you for many people, it’s just not easy to do.

The thought of spending your money may sound practical but it is actually very difficult to practice. Why? Because the biggest fear we have is running out of money and spending our money too quickly.

We all strive to make our money last as long as possible. As much as we would love to spend our last dollar just before we die, we don’t simply because we never know when we are going to die. If you can give me your date of death, we can plan perfectly.

Spend Your RRSPs before You Die

Although spending RRSPs for lifestyle makes sense, for many people, the thought behind RRSPs and RRIFs is to defer the income for as long as possible. Deferral is great but to a point. You can convert an RRSP to an RRIF as early as you want but if you have not converted them by the end of the year in which you turn 71, you will be forced to. But consider this . . . if you have not used the money by the time you turn 71, what makes you think you will need the money after 71?

In my experience, most people that defer RRSP/RRIF income to age 71, take minimum income, which is the smallest income, possible. This often happens not only because they do not want to pay the tax on the income but also because they probably don’t really need the income either. Although deferring tax to the future can save you money while you are living, it may actually hurt you in the long run especially when you die.

When you die, all of your RRSP becomes taxable at once unless you have a spouse to transfer the RRSPs to. But eventually when the second spouse dies tax becomes inevitable. Dying with your RRSPs is the same as cashing out all your RRSPs at once and if you think about it, most people would not cash out their RRSP at once in fear of paying too much tax.

Despite these well-known benefits, there is increasing criticism about the RRSPs, especially from the already retired group. Most of this criticism stems from the fact that you eventually have to pay the tax when you take the money out of the RRSPs. Many retirees argue that the original deduction was not free. It comes with a price later in life. If that’s the case, then we need to learn how to take advantage of the system in our own favour instead of the governments favour.

The Proper Use of RRSPs

So the secret to using the RRSP properly is to stream the money out over a long period of time instead of a short period of time because that spreads the repayment of tax out.
The best way to use RRSPs in your favour is to put the money into the RRSP when you are in a higher marginal tax rate and take the money out when you are in a lower marginal tax rate. In doing so, you will win every time. For more details on this check out my recent article on the proper use of RRSPs.

If this all makes sense to you then using RRSPs properly requires some planning around a strategy to get the money out of the RRSP. There are 2 great reasons to withdraw money from an RRSP:

What Is a Sinking Fund? All Your Questions Answered

What Is Options Trading? How to Trade Options In Canada