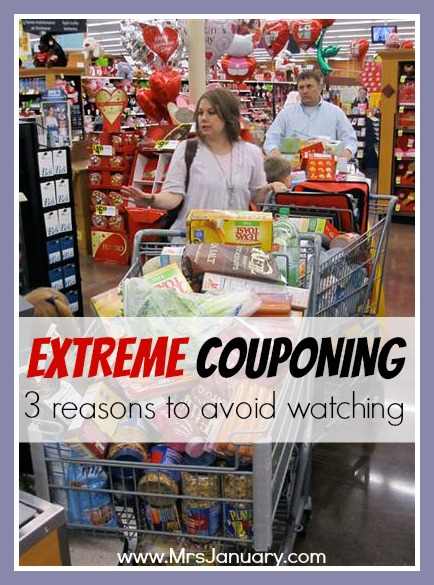 A new season of Extreme Couponing aired yesterday and like I expected, I am still disgusted by it.

When Extreme Couponing first aired back in December 2010, I was really excited. I couldn’t wait for people to see just how much couponing can help you to save money.

What I didn’t expect, was a show that displayed a lack of real couponing.

Because of the way the show is, I no longer watch Extreme Couponing – and you shouldn’t either. Here’s why:

I thought that this show was created to teach new couponers how to use coupons effectively, but what it actually is, is a show that is all about ratings. Even if that means teaching these newcomers how to coupon the wrong way.

On many episodes, you will see shoppers buy hundreds and thousands of dollars worth of groceries and pay just a few dollars for it all. This is absolutely not how it works in real life.

These extreme couponers know a few months in advance that they will be on the show – which gives them plenty of time to purchase high value/free coupons from coupon clipping services and on eBay.

Extreme Couponing does not add the cost of these coupons into the total amount paid by the shopper at the end of his/her transaction, which means the grand total paid is actually more than what they say it is.

To say the show is scripted is a huge understatement.

Many times you will see the shoppers clear entire shelves worth of products.

There was even one episode where another shopper came up to an extreme couponer and asked if she was taking all of a certain product and mentioned that he only wanted to buy one.

She said yes and he looked annoyed. This was fake. That man worked for the show.

When it comes to clearing shelves, the shoppers on Extreme Couponing actually order those large quantities from the stores in advance. They clear the shelves for the show, to make for good TV, and then put all of the products back on the shelves and pick up their orders when they’re checking out.

Most stores on the show actually alter their coupon policies just for these shoppers. They do this so that they can get their store advertised on television.

When you see a shopper do 15 transactions in order to take advantage of in-store discounts, this is likely a store that changed their policy just for the show.

They would never actually allow a shopper to do this.

Stores are now changing their coupon policies, and not in favour of couponers.

I have no doubt that this is because of the amount of new couponers that Extreme Couponing has spawned, trying to get every deal possible.

Instead of watching a fake show such as Extreme Couponing, consider doing some real couponing instead.

You can certainly be an extreme couponer in Canada, but you will never be able to achieve what you see on the show (unless you pay for a ton of FREE coupons!).

What are your thoughts on the Extreme Couponing TV show?

5 ways to make your career a success

What Is Asset Allocation? And How Can It Impact Your Investment Portfolio?