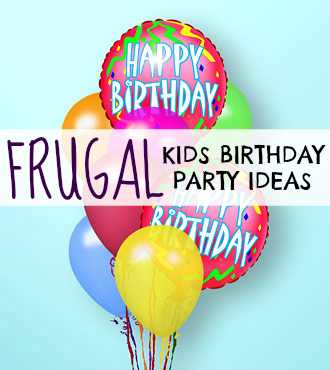 My son’s first birthday is coming up, and I have just started to plan his birthday party. It’s not going to be elaborate or anything of that nature since, well, he’s turning 1. It’s not like he’s going to remember everything about the party!

I do believe that the 1 Year birthday is pretty important, though, so I do want to have a little party for him.

As much as I would like to, I’m not going to go all out on this birthday party. I don’t want my guests to think we’re cheap by not having a lunch or dinner (we’re having the party from 2-4pm), it’s just that we really cannot afford to feed a bunch of people.

We will have finger foods and things of that nature, but that’s about it. I’ve been researching ways to save money on birthday parties and have found a lot of great ideas that I thought I would share with you.

If you are having the party around lunch or dinner time, you can serve hamburgers and/or hot dogs (depending on the time of year) but this can get pricey if you have many guests.

If you only have a handful of people coming, this would be cheap to do, but if you have many people attending the party, I would stick with finger foods only.

What are your frugal ideas for kids birthday parties?

How to Claim Business Income and Expenses

How To Get The Best Home Insurance Quote in Canada