How Does Pension Income Splitting Work? 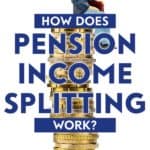 One of the difficulties that many Canadians face as they age is the fact that pension income can boost taxes paid.

This can be especially frustrating in situations when you might have a higher income due to you pension, investments and possibly a higher income job still, but your spouse has a much lower income and a lower tax rate.

Starting with tax year 2007, the Canada Revenue Agency has introduced a new way of reporting pension income: You can actually split it so that some of the income goes to your spouse in a lower tax rate.

Overall, the effect of pension income splitting can be to lower your household tax bill.

Reallocating Pension Income to Someone Else

If you want to reallocate some of your pension income to someone else, you need to be a Canadian resident at the end of the year, and you also need to be in a common law partnership or marriage with the person you plan to transfer the income to. Some of the pension income that qualifies include:

These are sources of income that can boost your tax rate and cost you more money. Being able to determine an allocation of funds that can be included as someone else’s income can be helpful in lowering household taxes.

Realize, though, that some of your income can’t be reallocated in this manner. Old Age Security, Canada Pension Plan (and Quebec Pension Plan), and retirement compensation plan income are not eligible for pension income splitting.

How to Report Your Pension Income Splitting

In order to take advantage of the pension income splitting provision, both you (the pensioner) and your partner (the pension transferee) need to file tax returns. Together, you fill out Form T1032, Joint Election to Split Pension Income. Both of you need to sign the form in order for it to be valid.

Once this is done, the income for each of you changes. If your partner’s income is much lower than yours, there is a good chance that adding more won’t harm your situation. Indeed, he or she will still likely be in a lower tax bracket.

If you plan it properly, you might even drop to a lower tax bracket as a result of the income splitting. Even if you don’t drop, though, pension income splitting can still reduce your income so that you don’t pay as much in taxes.

Talk to a tax professional to get a better idea of how pension income splitting works, or visit the CRA web site.

Everything You Need To Know About Spousal RRSPs

15 Ways to Use Lemon Peels

How to Overcome the Blue Monday Effect on Your Finances