To be interested in the changing seasons is a happier state of mind than to be hopelessly in love with spring. 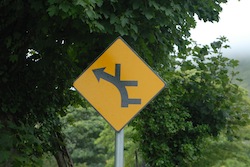 I’ve been thinking a lot more serious about my investment approach lately since we’ll soon be at a point where we feel more comfortable about participating in the markets again. This is based purely on the stabilization of our personal financial situation and does not by any means represent a bullish call on the stock market. I still have serious concerns about the structural problems in the markets and the economy, and the 100% run since the March 2009 lows doesn’t make me all that sanguine about putting money to work here and now.

With those caveats in mind, I do anticipate some form of re-entry to the equity world over the next 12 months or so. I wrote about how this eventuality led to my concept of The First Rule of Personal Finance and Investing last week, and a question in the comments section caused me to really think about how I feel about a passive investing strategy. The question came from a successful teacher, investor, and author Andrew Hallam. (His soon-to-be-published book is called The Millionaire Teacher and it looks like a fascinating read.)

It seems Andrew has sold all of his individual stock holdings in favor of a few low-cost index funds. He’s got a 25 year time horizon and he’s pretty confident that his positions will be “significantly higher” in 25 years. He’s not worried about the prospect of a 50% decline in the short term because he’ll be buying more at those levels and will still likely end up with some good gains by the time he’s ready to stop working.

Passive investing: I get it but …

Leaving aside the fact that most of us do not have a 100-year time horizon, you can’t look at a 100, 50, or even 30-year chart of North American indices without noting the trend from the lower left to the upper right. Passive investors aren’t as thrilled with the 10-year charts, and they don’t want to see a 20-year chart of the Nikkei either. Those are seen as outliers.

One of the main ideas behind passive investing essentially matches my first rule of personal finance and investing: anything can happen. We cannot predict the day to day or even year to year gyrations of the markets, so it’s a waste of time to try. Heaven knows I’ll be the first to admit that predicting market movements is somewhere between difficult and impossible. So I can certainly sympathize with passive investors there.

I guess my beef isn’t so much with the concept of passive investing itself as with the dogmatic tone that some of its hardcore proponents have taken. In some circles, passive investing is presented as the only way for intelligent investors to manage their money, with the corollary implication that those who do not embrace it are not intelligent. While I don’t deny that passive investing can be a good approach for many investors, I don’t think any single strategy fits for everyone.

Aside from the proselytizing of a few passive investors, my main point of contention surrounds the concept of secular market cycles. While the default direction of markets may indeed be upward, there are periods of time where they trend sideways to lower for more than a decade. These are the secular bear markets, and many, including myself, believe we are about 10 years into one right now. Secular bear markets are just periods of time where markets exhibit increased volatility, but end up essentially unchanged in the end.

During a secular bear market, a purely passive approach is not going to be very successful unless your time horizon is so long that you can ride out the years of flat performance, continuing to buy the dips. If that’s your position and you’ve got the stomach and the time to hang on, fine. But if like many Baby Boomers, you happen to encounter a secular bear market during the final 15 years of your working life, you may have a tougher time reaching your retirement goals.

I like to include the bigger picture cycles in my investment approach. As 2010 wound down, I wrote about Kondratieff’s seasonal cycles in Get Me Through December. It’s not that I think cycles should be the backbone of any investment approach, but that they provide the context that’s missing from a purely passive methodology.

First, let me say that I would never tell anyone how to invest their money. I have a hard enough time trying to figure out what to do with ours. So if you look at a bunch of different approaches and decide that passive-only is your choice, I say go for it. But if you look at all of your options and opt for a more active approach or a hybrid model, I would say the same thing.

I saw an interesting take on the indexing debate in a posting on the Canadian Money Forum, which I came across via Million Dollar Journey. In it, the author suggested the following approach over your investing life cycle:

By “purchasing the broader market”, the author means buying a representative selection of individual stocks. The basic idea is that the low management fees associated with index funds can get more expensive as your invested assets grow. 0.17% of $100,000 is a lot less than 0.17% of $1,000,000. I think that’s a fair point.

Another alternative to a strictly passive approach might be to buy an index fund or two but also dabble in a few select stocks that you really like but are not represented in the index. You can also control your risk by simply adjusting your overall exposure to the markets. Perhaps you want to take a fully passive approach to invest, but you’re a little worried about market volatility, or you’re getting closer to retirement. One solution could be to simply cut the percentage of your market exposure to a level that lets you sleep at night. A 50% loss doesn’t hurt nearly as much if you’ve lost half of only a small portion of your total wealth.

There are people who are very good at trading the markets, minimizing risk and maximizing profits. Admittedly, the “average investor” (including myself) will not likely be able to accomplish this consistently. But that shouldn’t stop anyone from trying to figure out which approach or combination of approaches will work for them. It may be a passive plan, an active one, or something in between. Our approach will probably be a hybrid, although I haven’t yet figured out exactly what it will look like, and I fully expect it to evolve over time.

What’s your position in the perpetual passive vs. active investing debate?

PC Money Account Review: No-Fee Banking and a Prepaid Mastercard All In One

Make the most of the equity in your home