Saving Money With An iPhone

The iPhone has been an elusive beast for me. Back in 2005, before the iPhone was announced, I remember jokingly telling my friend that I would only ever buy a cellphone if they made an mp3 player that can make phone calls. This was, of course, in response to the super cool new “mp3 cell phones” that were able to play music as well as do basic phone service. Well, they made one. Of course I didn’t get the iPhone, not right away at least, and instead spent my time talking about how I wanted to stay off the grid, not always be available, and how cellphones give you cancer. My how times have changed. Now my wife and I both have cell phones, we don’t regret it, and I don’t think we’ll ever go back.

Having The Internet Available Everywhere

First, the classic answer is that having a data capable device can offer you the whole advantage of the Internet while you are out shopping. You can make informed decisions regarding expensive purchases confident that you are getting the best deal possible. Just the other day while I was at The Gap the sales clerk asked me if I had a cellphone that could look up my email, as they had just that morning emailed me a 30% off coupon. Of course, this argument is often given by those who already wanted an iPhone, and this is how they convince their wife that they need one. “But honey, when I go shopping with you I can pull up coupons to all your favorite stores”! Nevermind the fact that he has no intention on going shopping with his wife, let alone using his phone to look up coupons when he could be keeping his eye on the score of the game.

Free iPhone Apps That Save Money

A slightly more ambiguous, but likely way my iPhone saves me money is through free apps. One free app, called Grow Your Own, is an application that teaches me the best way to grow vegetables. While I got it too late to help with my garden this year, I expect it to be a valuable resource for next spring, where hopeful less plants will die, more vegetables will be grown, and as such, save me money. Of course, the counter argument here is that most of this information could already be found online for free anyways, so why do I need a phone dedicated to this task? Well, that’s just it. The phone isn’t dedicated to the task, but it does manage to provide all the information required in a handy convenient package that would take days of research to pull together from various sources online.

Other minor ways that my iPhone can save me money is through the free bank apps, which allow me to check in on my bank account online, or through programs like Evernote and Dropbox, which allow me to work on home or business projects while out and about. Like I said, minor things, but each individual one adds up.

Last, and perhaps most importantly, my iPhone saves me money on entertainment costs. My daily commute is over 1 hour in each direction. That means that I spend a lot of time on the bus. My iPhone let’s me play games, surf the Internet, read books, even write this post. For example, i paid $3 for Plants vs Zombies, an iPhone game that i have dumped almost 10 hours into. The hourly cost of iPhone games can be pennies, remarkably cheap entertainment. Compare that to the cost of a DVD, let alone the theatre, or the price of a magazine or newspaper. Not only am I saving money by having cheap or free entertainment (in comparison to the cost of a handheld gaming device, or an e-reader, or book after book), but I am also saving money by making a more productive use of my time.

Now, to be fair, the only way that you’ll end up saving money with an iPhone is if you’re responsible with it. If you’re using it to buy all sorts of media, and you got the largest plan possible, then yeah, you’re going to be dropping a hefty chunk of change every month. But if you already paying for a cell phone plan, the price difference between a regular contract cell phone plan and an iPhone plan really isn’t that much. My wife is paying $50/month for hers, and I’m paying $65 a month for mine – after taxes. While that is leaps and bounds above a pay as you go type cell phone system, it is relatively average for a fully featured cell phone, with data plan. 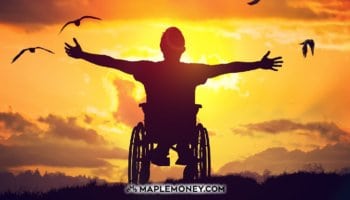 Overview of CPP Disability Benefits: Are You Eligible?

Why I’m No Longer Clipping Coupons