Why goals are way better than resolutions

Happy new year, my friend! 2015 is going to be an amazing year, I can just feel it! Even though I’m sick as a dog right now, I am confident that I am going to ROCK this year – and I know you will, too.

Simply put – they’re a waste of your time. 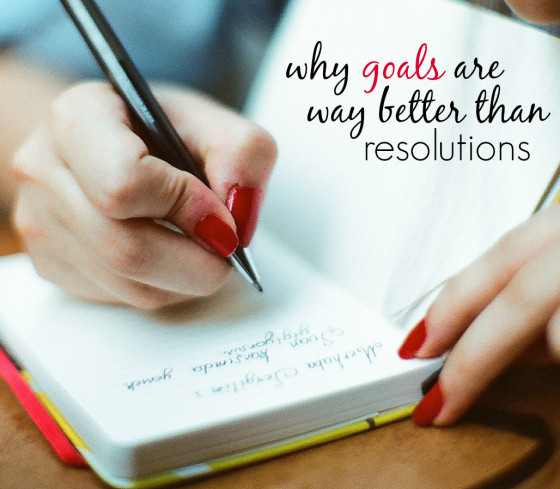 If you want to see improvements in your life – set goals, not resolutions.

As I said, resolutions just do not work. They may have worked in the past, but they’re not helpful for us anymore.

So what do you do instead?

Set goals! I’m a huge, huge lover of setting goals. I set goals every year, in all areas of my life, including:

You may also want to include other goals, such as fitness, nutrition, spiritual, etc.

But the key to making goal setting success is to do one very important thing – write your goals down. On paper. With a pen.

Doing this simple step increases your chance of hitting your goals by 42%!

I noticed that when I stopped setting New Year’s Resolutions, and instead focused my time and effort on setting S.M.A.R.T. goals (specific, measurable, actionable, realistic, and time-bound), I was able to accomplish many of them.

In fact, I can’t think of a single New Year’s Resolution that I’ve ever set that was accomplished. My goals, on the other hand, well, I’ve hit many of those!

If you want to have an amazing 2015, do yourself a favor and set some goals – not resolutions! If you need some inspiration, here are my 2015 goals.

Do you believe that goals are better than resolutions?

Does EI Inhibit the Overall Economy?

NSF Fees: How They Work and Ways You Can Avoid Them

How to Send Your Tax Return By Mail

How To Maintain The Balance Between Work And Your Personal Life