Why My Husband Quit His Job

Statistics Canada reported that the unemployment rate rose to 7.8% in January despite employment increasing by 69,000. Employment has grown by 327,000 (1.9%) since January 2010. Employment rose in Ontario, Alberta, Nova Scotia, Newfoundland and Labrador, Manitoba and Prince Edward Island.

My husband is now part of that group of unemployed persons.

That’s because my husband quit his job. 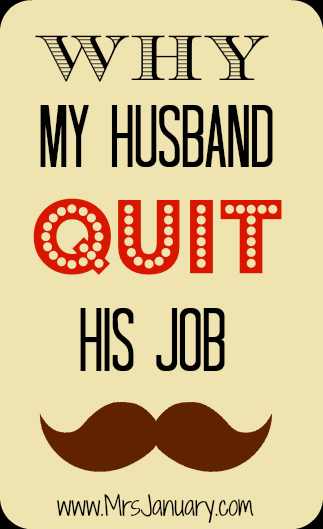 Why he did it:

Richard had been unhappy at his job for close to 6 months. He worked as a stock trader and he was constantly bullied and attacked.

This was the first time working in this field so he was just a junior guy, learning the ropes of the industry. Because of this, people treated him as though he was a pain in the ass. If he was unsure of how to do something and asked for help, his boss would yell at him to “pay attention”, as if he wasn’t doing that in the first place.

You see, they never taught him how to do this job. They just hired him and then pretty much had him look over the shoulders of other traders to learn how to do this job. Clearly this was not working very well because Richard wasn’t 100% comfortable doing his work.

He needed to ask questions, but was scared to do so because he thought he may be attacked for asking for some assistance.

When you constantly have someone in your face telling you how useless they think you are and how much you suck at doing your job, it can get pretty emotional. Richard came home on more than one occasion and would just break down over the ridicule he was put through all day.

I asked him what he wanted to do and he told me that his dream was to start his own company. I told him to go for it! He stood by me while I started numerous different companies (that all flopped, by the way!), so of course I would stand by him.

He was worried that we would be poor, and end up living on the street with our baby and 5 animals. Silly man. We have 6 months worth of living expenses in our emergency fund right now and I also have been making more money myself. We would be fine, I told him.

He took a few days to unwind then he started researching how to run his company.

After a few days, he came to the conclusion that he was just not quite ready to be working for himself. He was just not 100% comfortable to be doing that yet.

This realization made Richard very depressed. He felt as though he let me down, which he absolutely did not do. I tried to reassure him that everything would be fine, no matter what he chose to do.

It took a few days and then he decided it would be best to work for another company until he became more comfortable with the idea of working for himself.

Richard is now looking for a new job. I’m confident that he will be able to find something in a short while, but until then we are really tightening our belts when it comes to the budget. We have cut everything that is not 100% necessary (except cable TV – mama needs it!).

I think this will be a good test to see just how far we can make our money stretch, and you know what, I’m kind of excited about that.

What would you cut back on, if you were in this situation?