Does EI Inhibit the Overall Economy?

Saskatchewan premier Brad Wall caused a bit of a stir in January when he pointed out some inefficiencies in Canada’s EI system.  Now Mr. Wall got slapped on the wrist for being insensitive and too conservative by many media outlets, but I believe he has a pretty strong case.  The employment insurance program is ridiculously abused in this country and in many cases it is used to support seasonal workers as they do nothing for months at a time.  Wall’s main argument is that the artificial stability that EI brought to borderline-sustainable areas prevented the natural supply-and-demand pattern from bringing workers to western Canada where they are needed.  I have read very similar comments from government officials in North Dakota and Montana.  In the USA you have record level of unemployment levels, yet these two states are absolutely begging for workers and offering great wages as well.  If so many people were hard up for work you would think there would be lines of people heading out Bismarck et al, but instead people are saying to themselves, “Why would I go do hard labour in the energy sector, in an area that is cold in the winter, when I can just sit at home at get paid for it.”  This labour mobility issue is looming larger and larger.

Just Another Brick In The Wall

Premier Wall concisely stated his problems with the current version of EI when he said, “In some regions, a person can work just over 10 weeks and receive almost a year’s worth of EI benefits.  A worker in Regina will work roughly twice as long for significantly less; yet, employees and employers pay identical premiums into this $22-billion a year program.”  He went on to claim that EI works to, “discourage labour mobility in a way that hurts the national economy and ultimately individual Canadians.”  It’s pretty tough to argue with this logic.  Saskatchewan workers are in effect, paying Canadians (through equalization payments and EI payments) to sit at home in provinces that really don’t need the labour right now and not come to Saskatchewan.  I would be much more excitable than Mr. Wall is on the subject if I were in his shoes!

Not All Handouts Are Created Equal

For those of you that are not familiar with the Canadian EI program, what it seeks to do is apply different standards to every part of the country.  For a place like Alberta that has a very low unemployment rate, it is much harder to collect EI.  For other places where jobs are hard to come by, you can work a very short part of the year and then collect unemployment insurance for the rest of it.  In this manner, the government basically subsidizes thousands of workers across the country in many different industries every year.  Just from personal experience, I can give three specific abuses that illustrate the systemic problems with the system:
1) The local peat moss factory where I grew up needed a larger labour force in the summer than in the winter.  They offered fairly high wages during the summer months, and then when winter came every year they would downsize substantially and lay off employees (probably about 80% of the overall workforce).  These workers would usually get near the maximum EI payment for the other half of the year which was $485 a week.  When you consider that there are hardly any deductions at all on that money, that is an insanely high pay rate.  The government was paying perfectly healthy people NOT to work year after year.
2) Very similar circumstances to the first example.  My brother fights forest fires during the summers (yes this does impress the ladies), and the men (generally it is an all-male group) are some of the fittest men in the general workforce.  Many of these guys earn 30-35K working 5 months or so in the summer, and then apply for the same maximum EI rate of $485 a week.  Since most of these dudes are not lazy, they simply work under the table a few days a week at a garage, for farmers, or in the construction industry in order to supplement their income.  This isn’t abuse of the system by 2 or 3 people, this is a systemic built-in model that is widely used to soak up government dollars.  As a student, my brother is not allowed to collect a fraction of the payments these guys pay for sitting on their butts or working under the table.  What incentive is that providing him with!
3) The final example that I’m familiar with is the common use of EI to supplement the income received by educational assistants across Canada.  These EAs (also referred to as Teacher Assistants, or Para-professionals) don’t earn a yearly salary like teachers do, and so every winter and summer vacation they are technically laid off.  This is a great example of an instance when government tax dollars are essentially part of a compensation package that makes no sense.  Obviously these people should either be paid more during their school year, or they should easily be able to fine work during their consistent time off every year.  It certainly makes little sense the way it is set up now, and Premier Wall is right in stating that it is a disproportionate tax on his constituents.

I’m Fine With A Safety Net, But Does It Have To Be Made Of Silk

I’m not anti-employment insurance.  I think EI is a necessary safety net for many people, and used properly, it can actually increase the labour mobility that we need.  I think some form of bonuses should be included for people to find work sooner, or even better, for people to go back to school and take vocational training, or get better educated in an area that is “in-need.”  I do think the current system of EI is ridiculous, and it is actually a great example of why big government policies simply don’t work.  How do you create a system that can be fair to a single mom that loses her only source of income and has obvious problems moving to a new area, relative to a young 20-something who is perfectly capable of work, but would rather only work half of the year.  We need to substantially trim EI benefits, offer better incentives (instead of harmful disincentives) and provide extra support on a case-by-case basis instead of having huge loopholes for high-earning seasonal employees to jump through (I’m still frustrated by the idea that people in seasonal industries want government assistance at all.  I mean you knew going into the job that it was seasonal, so why should the government supplement your compensation package?).  With high tax rates from earned income and generous EI benefits, we are creating huge disincentives to actually find work.  This will continue to be a problem until we develop the political will that Mr. Wall and North Dakota/Montana politicians are advocating for.

TM writes about all things personal finance over at My University Money. He intends to continue his quest for lifelong learning and hopefully help others along the way.

View all posts by Teacher Man

9 Surprising Ways to Use Coca-Cola

How To Make Money On Ebay 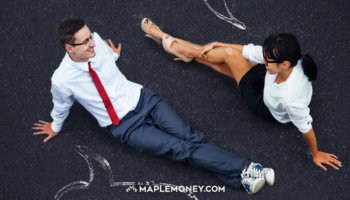 How to Use Online Insurance Quotes to Get the Best Deal