Your Financial Hierarchy of Needs 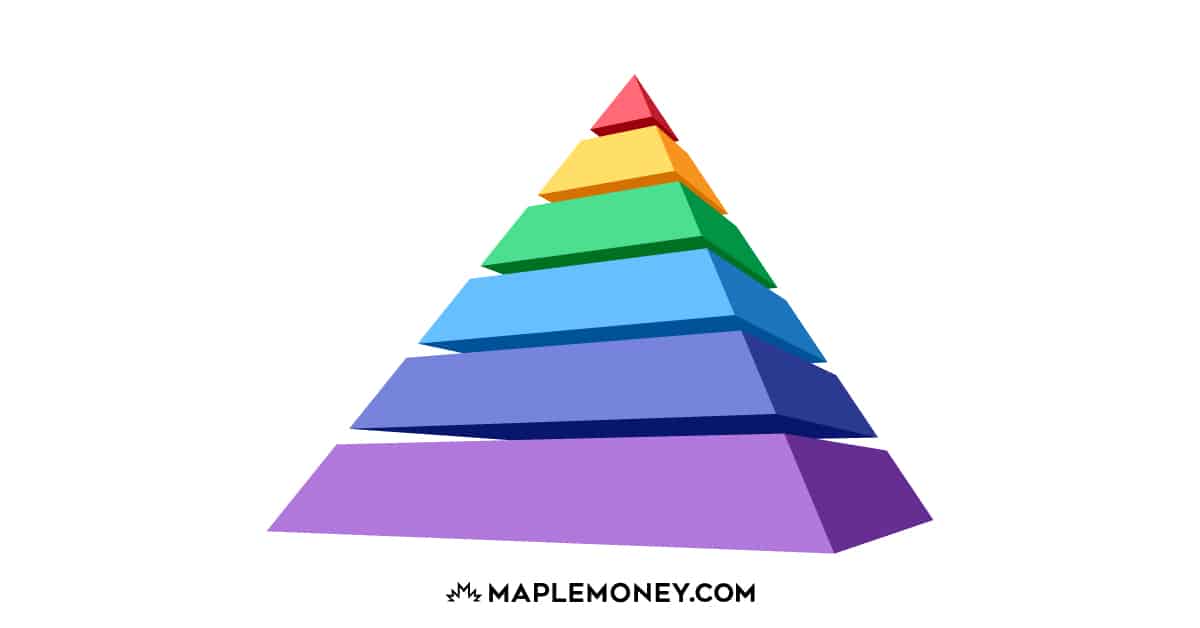 The elevator to success is out of order. You’ll have to use the stairs.

Abraham Maslow is the psychologist best known for his hierarchy of needs. He basically postulated that humans need to have more basic needs fulfilled before we try to satisfy higher level needs. If we try to attain higher self-esteem while more basic needs like steady employment or a stable family life go unmet, we will feel uncomfortable and stressed out. This goes along with the idea that discomfort means change is required.

Now I am certainly not the first to draw a parallel between Maslow’s hierarchy of human needs and our financial needs. In doing the research for this article, I came across a great post on My Money Blog from September of 2008 in which a hierarchy of financial needs was presented, and a book called Retirement Income Redesigned was referenced as the source of the information. There is a chapter in that book by Mitch Anthony and Lewis J. Walker called “Maslow Meets Retirement”. I haven’t read the book, but I did find an article by Mr. Anthony that outline his version of a financial hierarchy.

I like the idea of a financial hierarchy of needs. I think it reminds us not to put the cart before the horse. I would, however, structure my hierarchy a little differently than Anthony and Lewis. They have “gift money” as the second from the top level of their pyramid. If you read my 10 Steps to Fiscal Fitness, you know that I think giving should be part of every level of the pyramid. If you’re only managing to cover the basics, just give a small amount. If you’ve made it higher up the pyramid, give accordingly. Waiting until everything is just right to share doesn’t square with me.

If anyone asked me to make up a hierarchy of financial needs (nobody has, but I’m doing it anyway), it would probably be a combination of Elizabeth Warren and Amelia Warren Tyagi’s Lifetime Savings Plan and the aforementioned 10 steps to fiscal fitness. (The Lifetime Savings Plan chart can be found in yesterday’s review of the book or on page 170 of All Your Worth.) Here’s how I would draw my hierarchy: 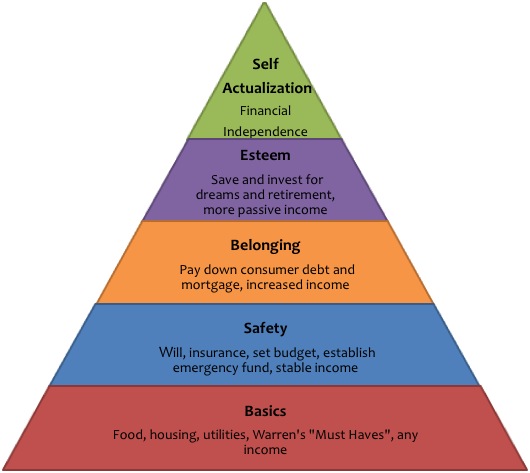 The text in bold refers to Maslow’s title for each level, and the smaller text is what I would include in that level for a financial focus. I also refer to income at each level. No matter what some might say, your income level really does matter. It should never be used as an excuse for saving nothing, but in my experience it’s a heck of a lot easier to save and move up the pyramid when you have more money coming in.

The top level of my pyramid is financial independence. This will mean different things to different people. For me, it means being able to live 100% on passive income – income from pensions, investments and interest. Guess what? That’s retirement folks. Some day, we are all going to need to be financially independent. When I start waffling on savings or getting lazy with the budgeting, I try to remind myself of that fact, and revisit the math. That’s usually all it takes to straighten me out and make me realize that saving comes first.

The specifics of the hierarchy aren’t quite as important as the principle behind it: Success in anything happens one step at a time. Skipping steps will only lead to pain, discomfort, and occasionally long term damage. Focus on one level at time and you’ll reduce your stress level immensely – and probably avoid landing in financial traction or paralysis!

What do you think of this hierarchy? What would your hierarchy look like?

Get me through December

Get Rewarded for Smart Spending

Real and Nominal Rates of Return