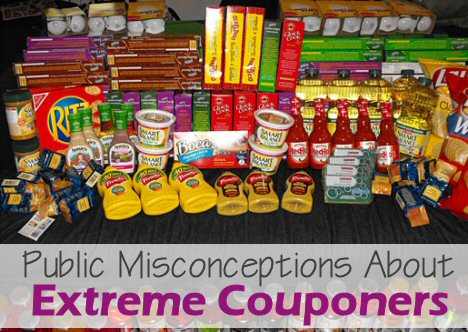 There are many misconceptions about extreme couponers out there (big thanks to Extreme Couponing and their shady practices) and I think it’s about time to clear them up, don’t you?

Since when is saving money a crime? Why do people feel the need to criticize others when they shop with an “extreme” amount of coupons? Is it jealousy? Or do people simply not understand what extreme couponing is all about?

Here are a few public misconceptions about extreme couponers:

Although the majority of food coupons are for unhealthy food items, that does not mean that us extreme couponers only buy those items. Most of us eat a balanced diet – even if that means buying fresh, healthy food, without a coupon.

Research has shown that Canadians making more than $150k a year are just as likely to use coupons as those making $50k or less.

If you see someone using coupons, don’t automatically assume that they are using them because they’re poor. You may be surprised to learn just how much money the average coupon user makes each year!

Who really needs 77 bottles of mustard or 1,500 sticks of deodorant? Who actually needs to stockpile dozens of packages of diapers when they don’t have a baby?

The answer? No one. Obviously.

So why are extreme couponers buying these items? That’s simple – because they’re usually free (after coupons are applied). Many extreme couponers donate their excess to local food banks, shelters and friends & family.

What’s the difference between stockpiling and hoarding? Hoarders hold on to everything, even if they know that they don’t need it. Extreme couponers stockpile, and stockpiling is when you buy something for future use.

Stockpiling groceries may seem strange to some, but it is one of the best ways to save money on your grocery bills. Don’t assume that just because someone purchases large quantities of items with coupons, it means they are hoarding them. They may be keeping what they can use, and donating the rest.

Extreme couponers spend all of their time on couponing

Although extreme couponing is hard work, and in the beginning, it may seem like a full time job – but I honestly don’t know anyone that spends all of their time on couponing.

The amount of time spent couponing varies greatly on the amount of deals you want to purchase, how many coupons you accumulate and how much time you really do have available.

I consider myself to be an extreme couponer, and only spend an average of an hour a day on couponing (sometimes less).

Remember the important rule of never judging a book by it’s cover. If you see someone buying dozens of chocolate bars, or cases full of dish soap – don’t assume that they are poor or hoarders.

We all know what assume stands for right? When you assume, you make an ass out of you and me. Don’t do it!

What other misconceptions would you add to this list?

Are Money Market Funds a Good Place to Park Your Cash?

How minimalism can save your finances

Snowboarding on a Budget

How to create a coupon binder